About the same time in mid-1999 that I was getting my “project” Eight Ball machine I found someone selling a Xenon in the western suburbs of Chicago. My recollection is that he listed it on the Mr Pinball Classified ads.  Unlike Eight Ball, this machine turned out to be in absolutely mint condition. After some email negotiations I agreed to pick it up one Saturday morning in late May. 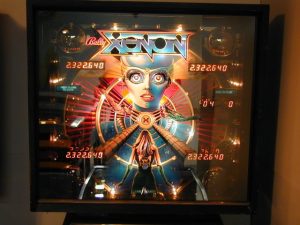 As much as I hated to drive from Minnesota to Chicago, the machine turned out to be worth it. (Also, since my sister lives in the same area I could visit her and her family and use her house to crash.) The guy I bought it from claimed it was in such beautiful condition because it had had only one owner and that he had never so much as moved it. He said it was set up in the laundry area of a small apartment building and didn’t get much play. With a factory mylar installed on the playfield, this is probably the only “museum-quality” machine I’ve got. It’s nice to have such a beautiful example of a great game that is usually found badly beaten up and worn out! 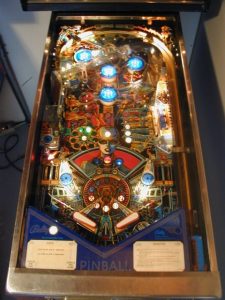 It’s interesting to have Eight Ball, Mata Hari, and Xenon sitting in a row along one wall of my basement, as they really illustrate the rapid changes that were taking place in the pinball industry during this 1977-1980 period. Mata Hari plays like an electro-mechanical machine that happens to be made with solid-state hardware. (In fact, there is a rather rare electro-mechanical edition of Mata Hari — it came right on the cusp of the transition to solid-state.) Absolutely nothing is retained from ball to ball other than the score. Remember that in the EM era a single bit of “memory” meant a mechanical relay. Saving state information between balls or between players was expensive and impractical.  With Eight Ball the designers are starting to “get it” that they have a whole new set of rules to play by. The bonus balls in the central ball rack which are critical to scoring are maintained for each player throughout the game, so players can build up a score using multiple balls. Still, the machine has electromechanical chimes that, while charming, mark it as the relic of another era. 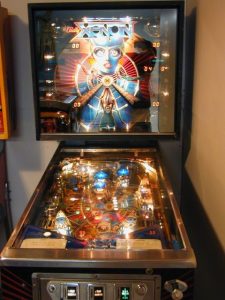 By the time we get to Xenon, the designers have really figured out that it is a brave new world for pinball. We’ve got computer controlled lights flashing everywhere (in addition to the famous “infinite strobe light” backglass effect), throbbing background music being generated by a second embedded computer system, and the sexed-up voice-over added by the game’s sound-designer Suzanne Ciani completes the sensory assault. What red-blooded male could resist her throaty entreaties to “try tube shot”? I’m happy to have this fabulous example of a classic machine in my collection.