This was the first time that our day differed markedly from “Kev time” – and we used a bus and a chairlift for the worst of it.  We left Champex at around 8 (I think) and arrived at the Cabane du Mont Fort close to 4 or 5 (I think – we didn’t keep really good track of departure and arrival times, though which I wish we had, just to be able to document real [50 yr old] time versus Kev Reynold’s crazy pace).

Here is the trip report for today:

Lesson learned for Barry: socks will NOT dry overnight.  Oops!  He washed all of his socks and most of his clothes in the sink/tub at Champex.  Rather, I washed his stuff and some of mine.  My socks didn’t dry either, but everything else did. We hiked with laundry hanging off of our packs today.

Today we hiked 4 hours from Champex to Le Chable, expecting to take the cable car up to Verbier and then to Les Ruinettes.  We met up with Marco and then the 2 Americans we encountered the first day – Cindy and Peter from Flagstaff.  We introduced them to the Finn realizing that they were on the same schedule.

As we arrived in Le Chable, we noticed that the lift wasn’t running – BAD SIGN!

When we reached the station, we found out that the cable had stopped running for the season just the day before.  Damn!  An important piece of information missing from the Cicerone book.  It was at this moment that we first got the idea to create an e-journal of our trip – to save others from similar mistakes.  It was a good thing for us that the cable car was right next to the train and bus station.  The woman in the little cafe/store didn’t speak English, and we don’t speak French.  But then she asked if I spoke Spanish – aha! a language in common – (more or less since I remember very little, and in recent years have used it mostly to order food and get around in Mexico).  But we were able to communicate well enough for us to learn that there was a bus to Verbier leaving in 40 minutes; we could buy the tickets on board; and the cable from Verbier to Les Ruinettes was still running.  YEAH!  Gumby be praised (you know –  be humble and respectable, but above all, be flexible) – he doesn’t mention being lucky.

Although we could have altered our plans, it would have been a pain.  And the bus was probably cheaper than the cable – less than $6.

We figured out as we rode up that this roadway was part of the Tour de France – riding UPHILL on some amazing switchbacks.  I can’t imagine it. There were painted signs cheering on bikers all the way up the very steep road.  This realization also explained the painted signs we had encountered in Le Chable – apparently purchased spots to cheer on participants and make “life statements” – we’ll share our favorite in the photo section.

Verbier is a small ski resort village perched on a very steep hill.  It is crowded with shops, hotels, restaurants and ski equipment stores.  We found a place to buy cheese, salami, cashews and cookies – for a considerable price.  We figure we’ll need lunch for tomorrow and the next day.

We took the cable car up to Les Ruinettes and then walked the short 1 1/2 hours or so to Cabane du Mont Fort – which is really nestled among the ski slopes of Verbier.  Alex (son) would be in heaven here.  Mountain bikers take the cable up and ride crazily down the mountain.  Paragliders come up and jump their way down.  Bell-ringing cows adorn the countryside.  It is an amazingly beautiful place.

As we reached the hut, we encountered some weird, eerie “heads” that started to sing and make noise as we approached.  At first we thought it was the wind.  The heads were strange and the sounds even stranger.  Later we found out that there was a motion sensor that triggered the heads to start singing when someone approached.  I have since Googled and found NOTHING explaining this strange mix of art, music and sick humor!

We are now moved into our private room in le Cabane du Mont Fort; sitting on the patio with a beer and a journal – surrounded by people speaking French and German.

There is one Kiwi couple (Viv and Nancy) who we’ll be able to talk to at supper.  They’ve hiked a lot of places so it will be fun to talk with them.

Important piece of information: we wondered about the “nylon” ropes that appear to enclose the cows.  They looked pretty benign and I questioned the intelligence of the cows….  Turns out they ARE electrified.  Barry made the discovery as we arrived at the cabane and found ourselves walking past BIG cows (just what is cow etiquette? do you look at them or avoid eye-contact?).  We then had to climb under or jump over one of these ribbon ropes.  He grabbed it, planning to hold it up and squeeze under it, but got zapped in the process.  No wonder it keeps the cows inside!

We had dinner with the “down under” crowd – the Kiwis and 2 Aussies (Joe and Ann) – all of whom have traveled a lot – they can help us build our “bucket list” (what to do before you kick the bucket).  The cowbells will serenade us tonight.

In retrospect, the hike from Champex to Le Chable, while offering gorgeous views of green valleys and villages, was kind of like the leg from Champex to Argentiere that we avoided.  It follows and crosses roads, and takes you through little villages along the way, but doesn’t have much rugged wilderness appeal.  If your time is limited, it might be worth considering taking a bus for that leg and hiking up to Mont Fort from Le Chable or Les Ruinettes – however much vertical you want for that day.  On the other hand, the views we were treated to on this day were unique for the trip.  And Cindy (who is a professor of history at Northern Arizona University) reported that she spied old Roman potsherds in a freshly-turned field as we approached Le Chable!

Gorgeous green valley views unique to this leg of the trip 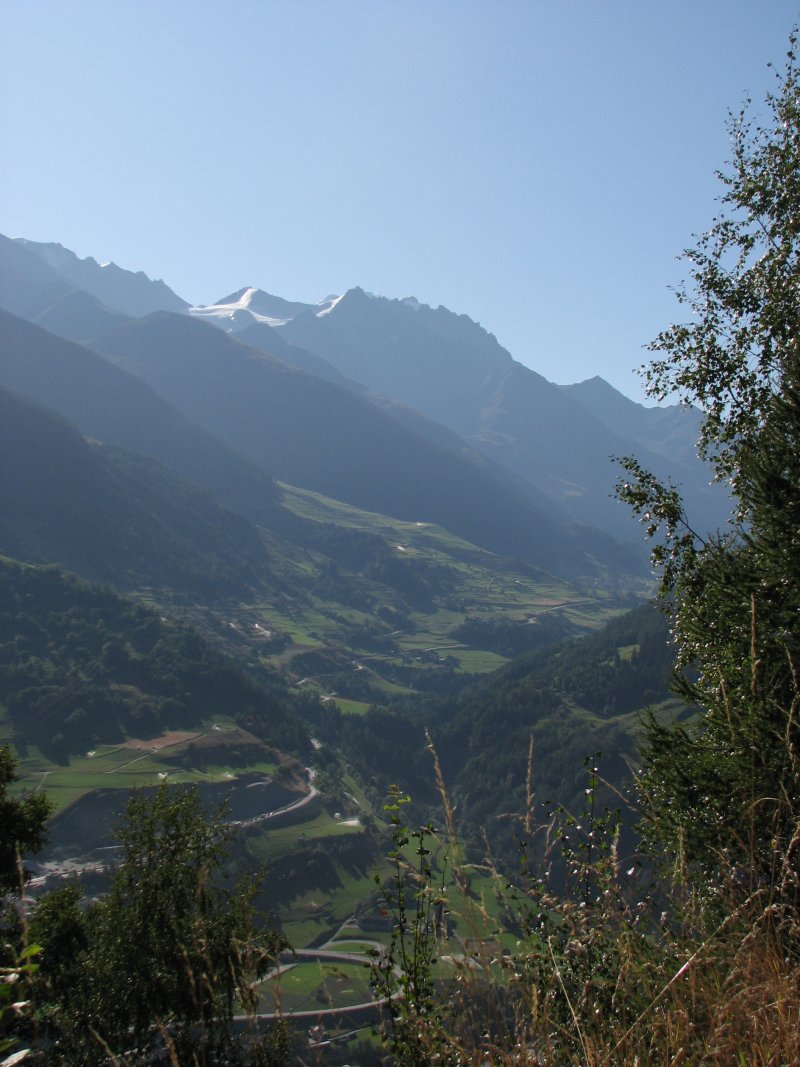 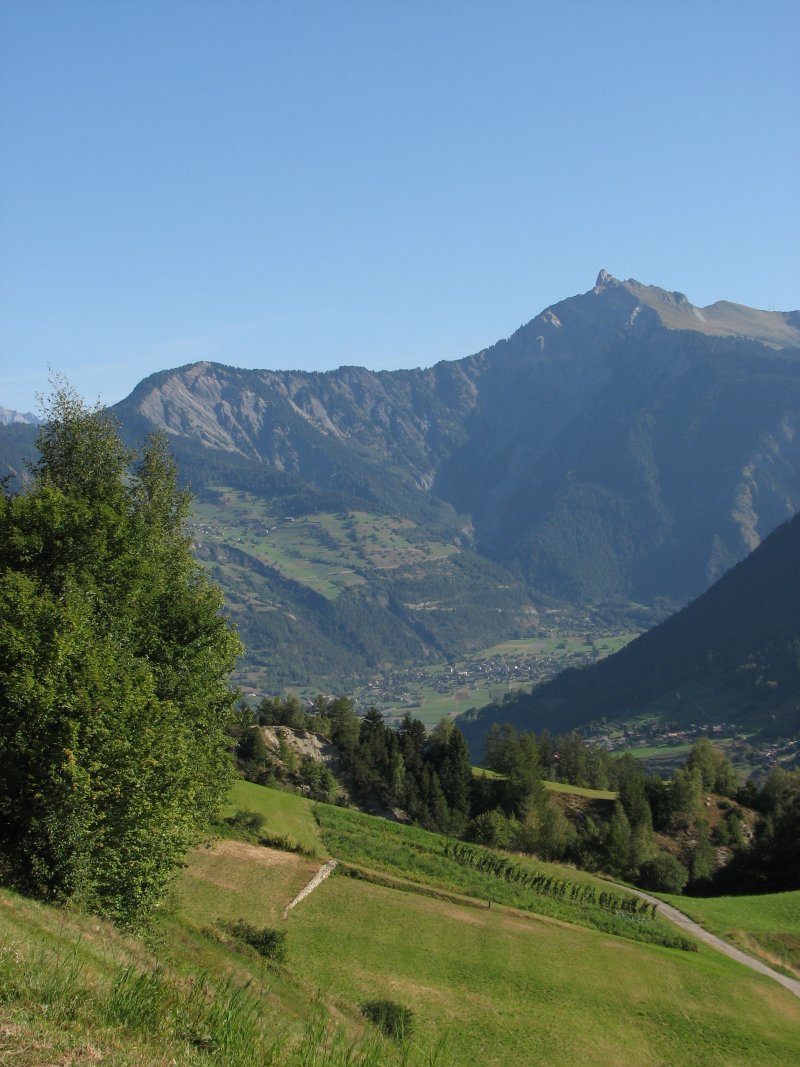 Walking through lovely villages on the way to Le Chable 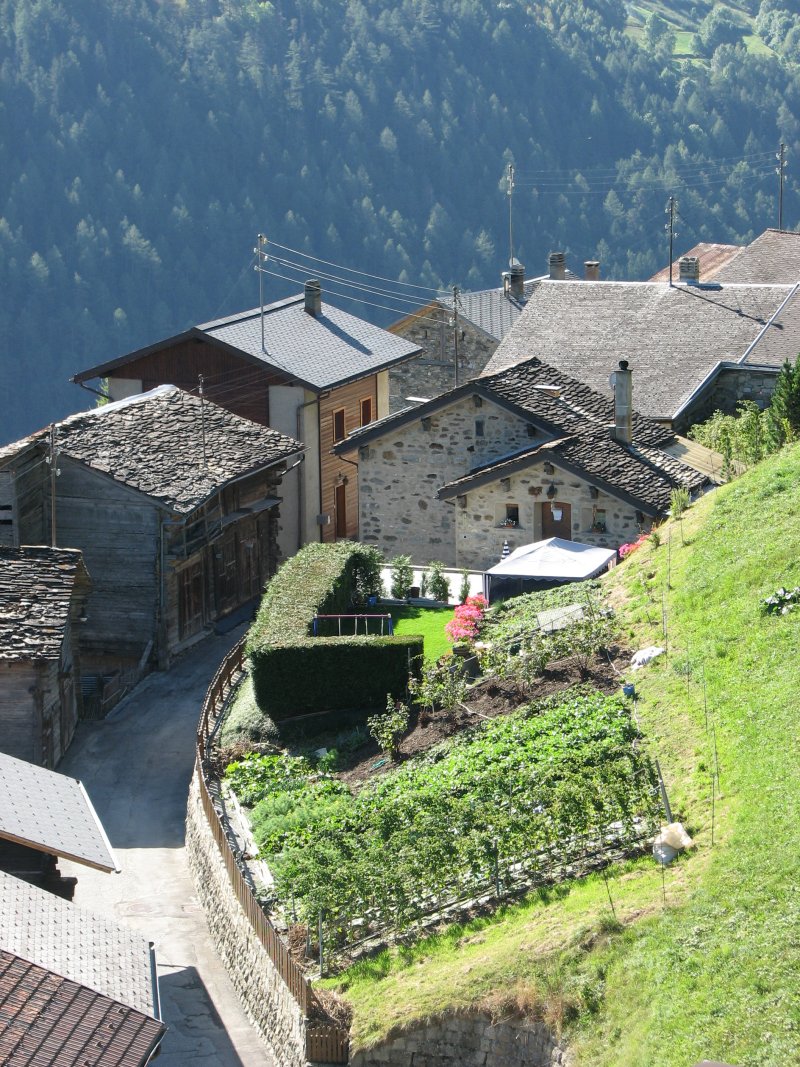 Once you are in the valley, you walk through a village to reach Le Chable – Barry with Marco 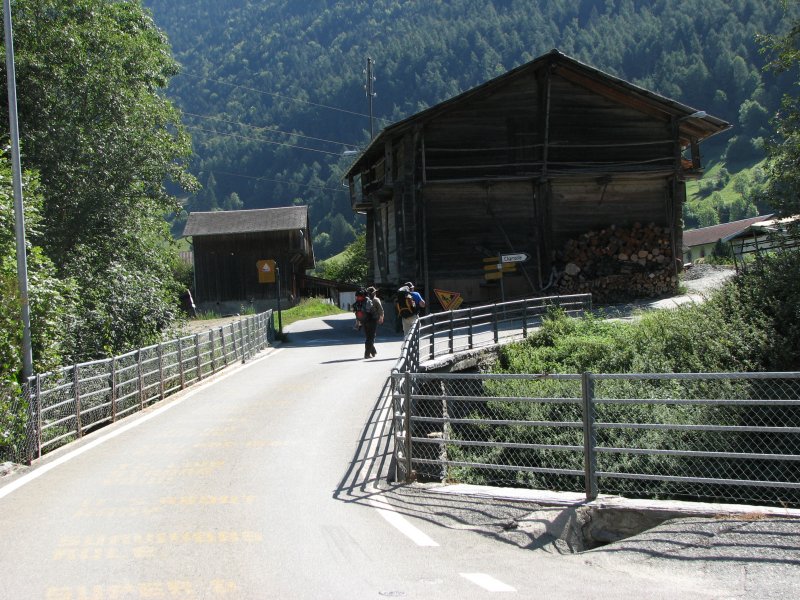 Sidewalk writing on the route of the Tour de France 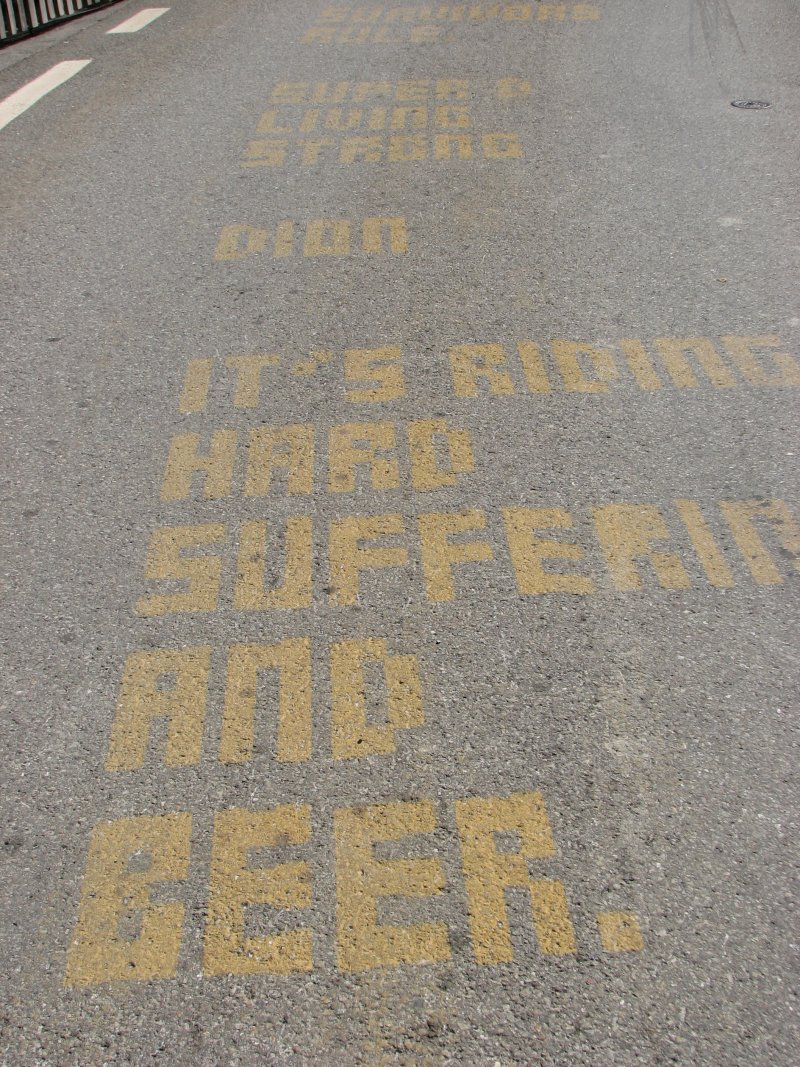 Sign atop Les Ruinettes – which way from here? (to the left and down the road) 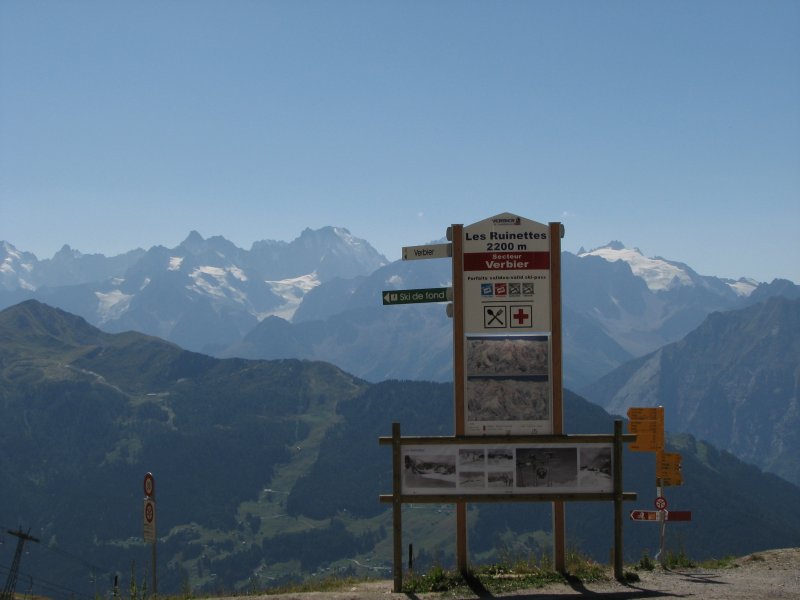 The path at Les Ruinettes was not obvious, except by figuring out which direction you had to head.  This was one of the rare times when we weren’t sure of the trail.  We were actually on a rough gravel road and were able to ask someone driving by (in a 4WD truck) if we were headed in the right direction.  They confirmed and assured us that we would eventually see the foot path to the cabane as it rose above the road on the left.  We spent a little time watching paragliders taking off down into the valley.  What an amazing experience that must be!  Though we had timed the 2-somes floating down into Chamonix and figured that for $200, you only got about 15 minutes of air time.  The single gliders could stay in the air a lot longer (or chose to since they weren’t charging someone for the ride).

Paragliders all set and waiting for the right wind 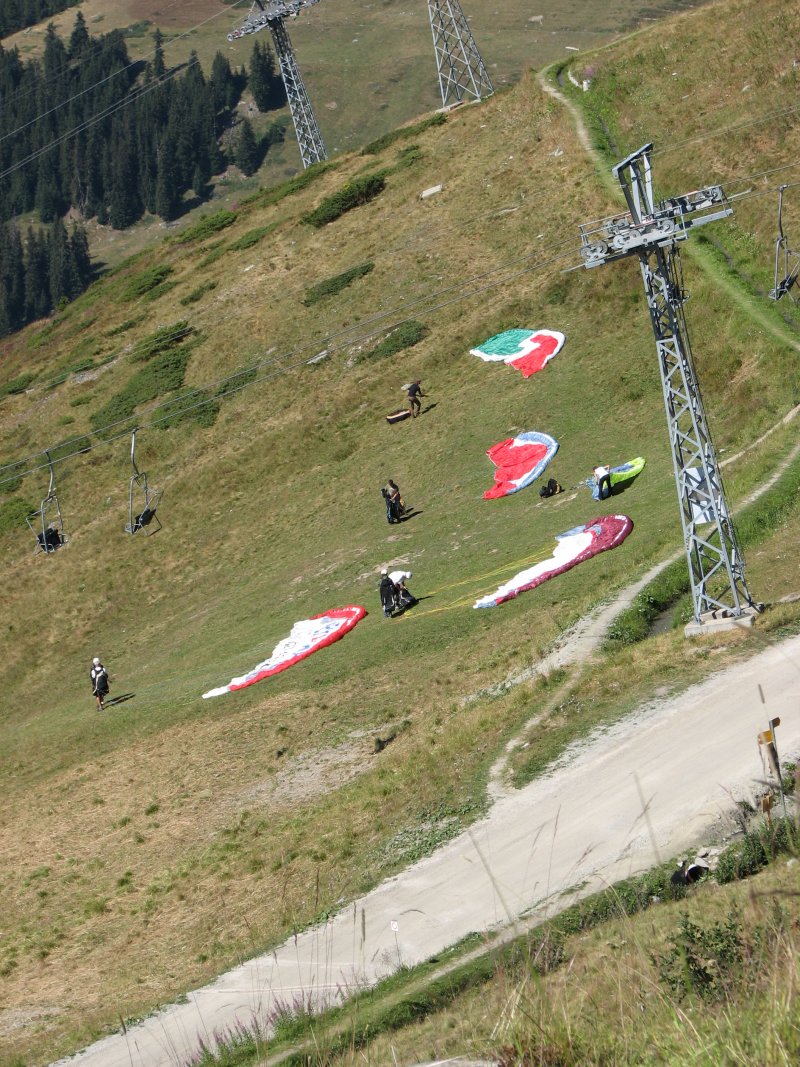 View of Gran and Petit Combins 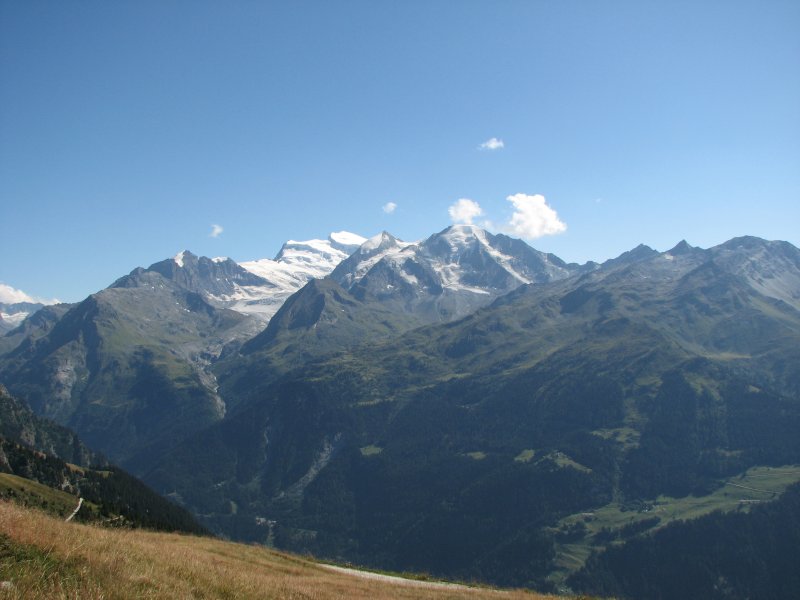 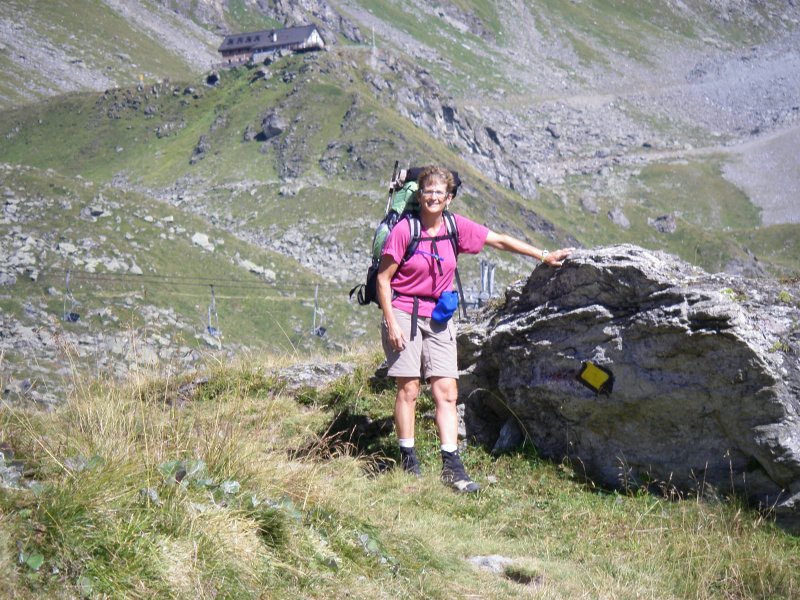 The Cabane du Mont Fort was our first mountain hut experience.  It was not very full during our stay, but we did have the opportunity to meet other travelers.  It seemed that the cabane had been remodeled recently (in the last few years).  It had numerous small rooms on the second two levels that provided quite a bit of privacy.  There were many rooms for 3 (like ours – 2 cots and a mattress), for 4 (2 bunk beds) and also 2 larger, dormitory style rooms with mattresses on the floor.  We were on the top floor, and the bathrooms and showers were on the level below us.  There is a room on the main level where you can store your boots and trade for indoor shoes (provided by the hut) or change into your own sandals.  I think there was a little kitchen area where you could also prepare your own food. 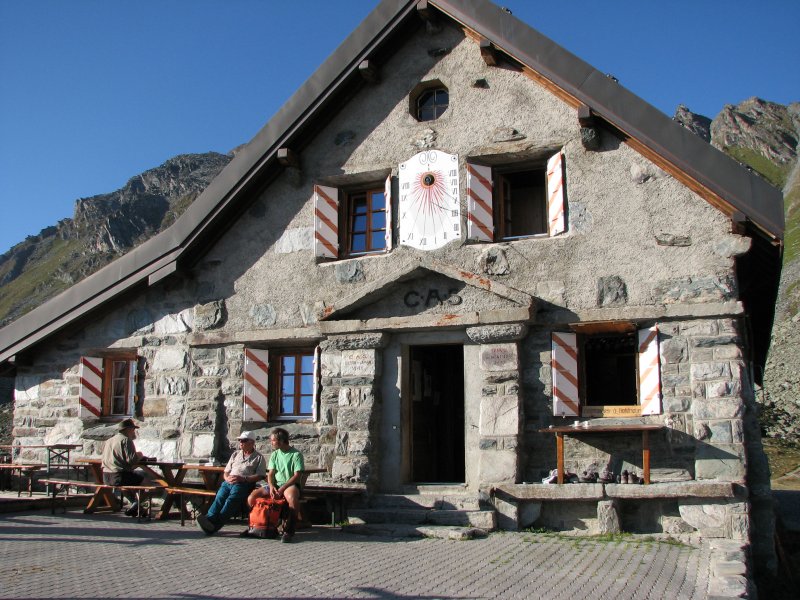 Lots of cows and bells 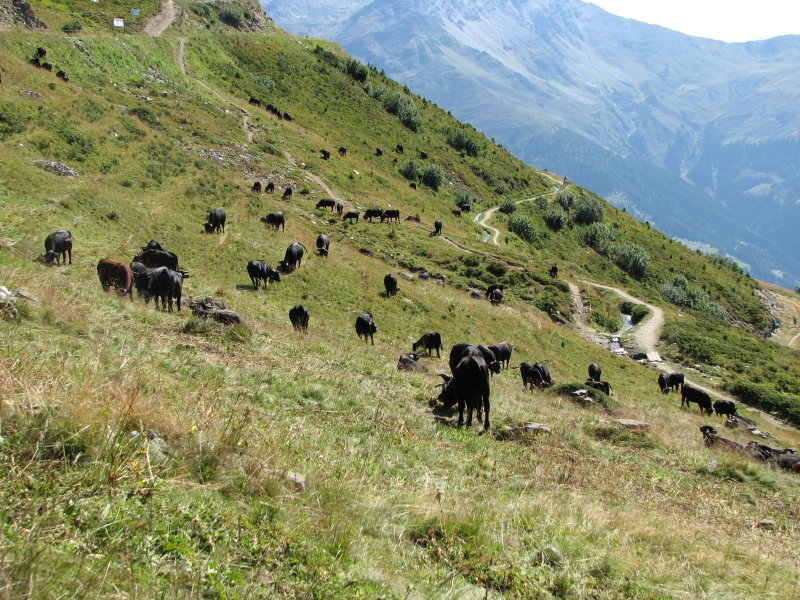 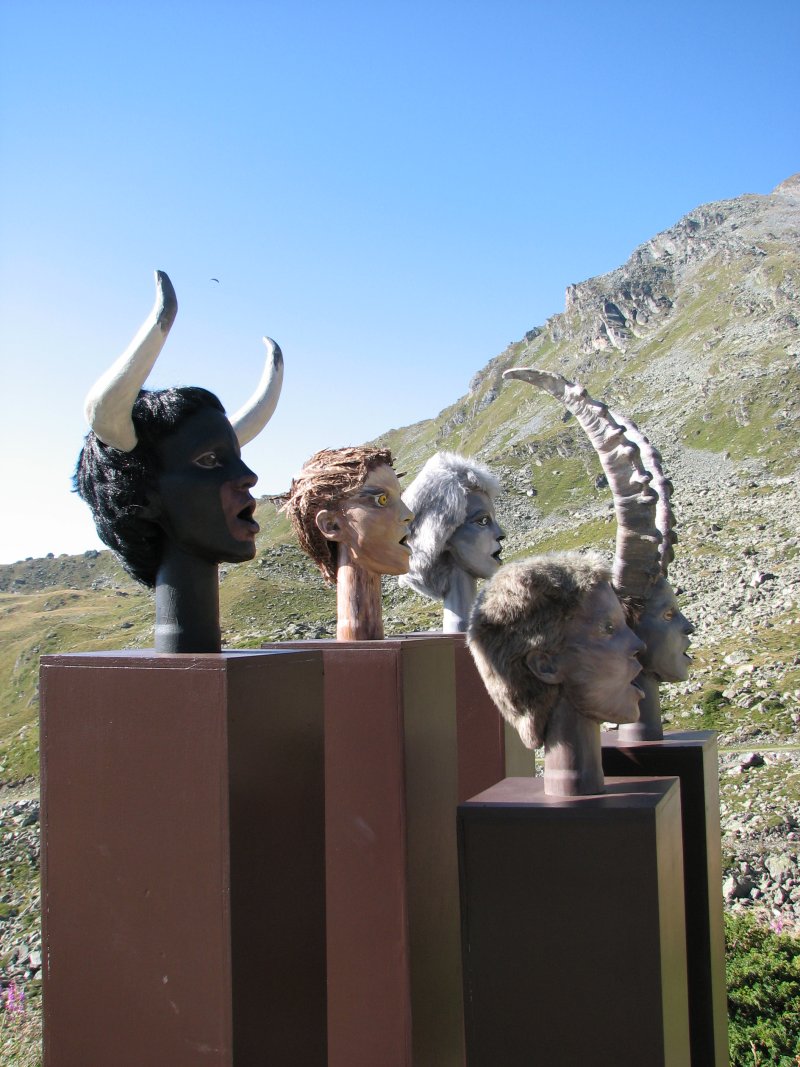 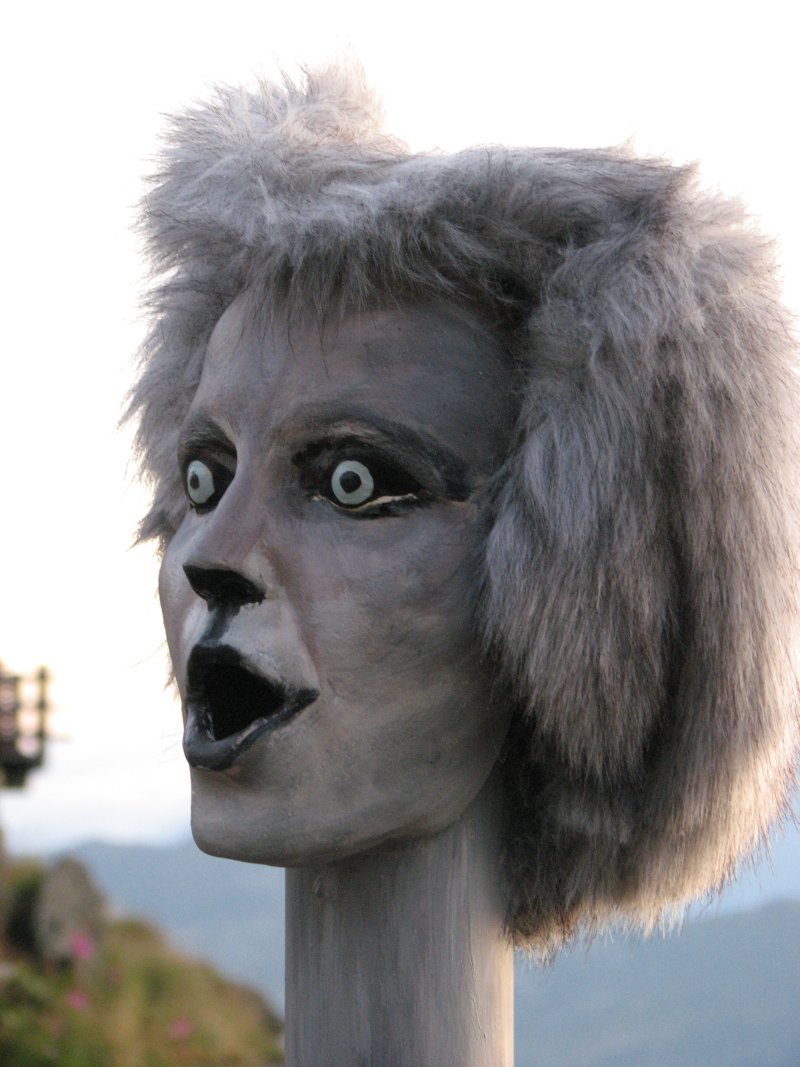 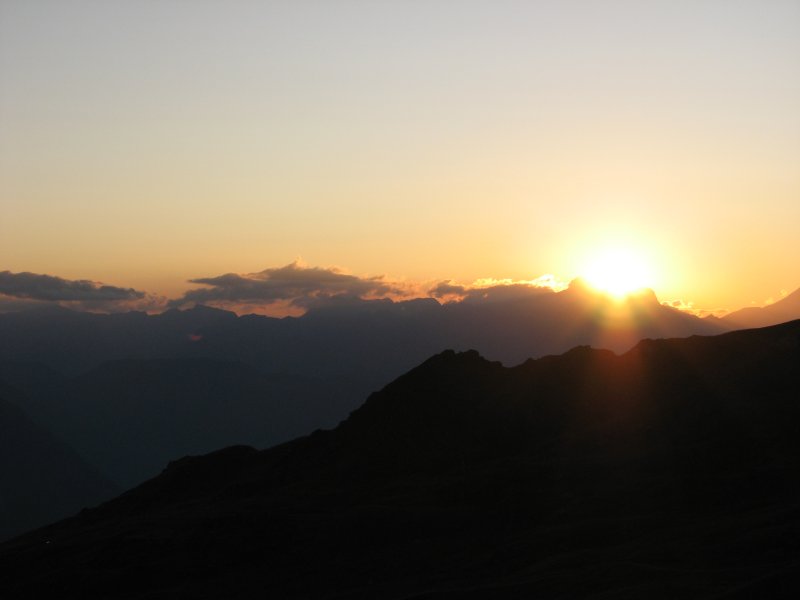