So there I was, browsing this new site I had just discovered in the spring of 1999. It was called “eBay”. It occurred to me that it might be fun to search for pinball machines — surely somebody somewhere was selling one, right? I can still remember bumming nickels from my mother to play during her weekly bowling league circa 1965 when I was all of six years old. I loved playing pinball as a kid and later in college, and I had harbored hopes then (long since forgotten in 1999) of having a machine of my very own one day. Lo and behold, eBay was chock full of pinball machines. I selected Mata Hari from a seller in North Carolina. I remembered playing Mata Hari during my freshman year of college in 1978. Made by Bally in that same year, Mata Hari was one of the first generation of solid-state machines. (For aficionados, my backglass has the writing on the dagger.) 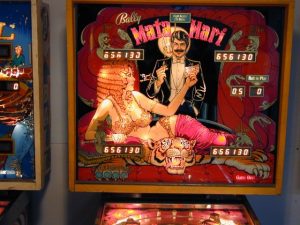 I picked up the machine at my local air shipping terminal, got several friends to help me trundle it down into my basement, and got it reassembled. Voila — I had a beautiful and very cool pinball machine of my very own. After a few hours, the real “fun” began when the displays went out and the machine locked up and I started to figure out what it really means to own pinball machines…you have to maintain the cranky beasts! I think it was Steve Young at The Pinball Resource who pointed out to me some years later that these machines were designed and built for a useful lifespan of two years! After that the operators were supposed to buy new ones. 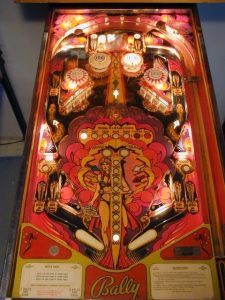 Of course, it was 1999 and my Mata Hari was over 20 years old… After weeks of screwing around with random lockups, learning to read and interpret the LED flashes on the Bally MPU board, replacing dead chips and re-wiring power supply and MPU connectors I finally had a beautiful and stable machine. Of course, I quickly discovered the invaluable repair and maintenance guides at Marvin3m and the dedicated pinball repair wizards in the pinball newsgroup (although it was still “usenet”, not  “Google Groups” in those days). I had a fair amount of help from the eBay seller as well. He was a bit embarrassed at the depth and complexity of the problems I had with the “working” machine he had sold me long-distance. I think we exchanged about 30 emails over the next 6 weeks. (Yes, eBay was different in those days, too.) 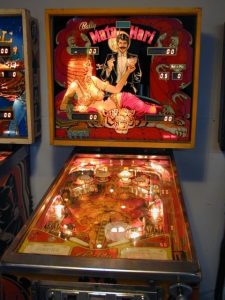 Let’s just say it’s a good thing I know my way around a multi-meter, logic-probe and soldering iron and can read a schematic! The problems with my Mata Hari were eventually resolved and by then I knew a heck of a lot more about Bally’s first solid-state generation and about pinball machines in general. The more I learned about these amazing machines the more hooked I became. It turns out that, for me at least, maintaining them is almost as satisfying as playing them!

One Reply to “Mata Hari”